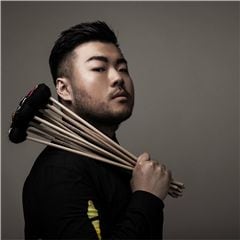 Born in China. Graduated with the first International Artist Diploma in Solo Percussion from the Royal Northern College of Music, UK with a full scholarship. Le also holds Masters Degree of Music with Distinction and Honours Bachelor Degree of Music from the RNCM, He has worked with Dame Evelyn Glennie, Keiko Abe, Ian Wright, Eric Sammut and Simone Rebello among to others.

Le has performed in front of the British Royal Family at the 60th Royal Over-seas League Competition Award Ceremony in London's Southbank Centre, where he has won the first prize of mixed ensemble category with his Aurora Percussion Duo, they have also won the Park Lane Group Competition. A year later they have been chosen by Yehudi Menuhin's Artists Agency "Live Music Now" to deliver exciting projects to special educational needs across the UK. Beside of chamber music he has also received many solo awards including Gold Medal at China National Percussion Competition; Winner of Italy International Percussion Competition Marimba Category B; The Best Percussion Award from World Brass In Concert with Brighouse and Rastrick Brass Band and First prize of Yamaha European Scholarship Competition 2012.

Le is a Signature Artist of Encore Mallet. Inc. Sabian Artist and a Yamaha Artist. Currently he has been appointed as a Honorary Associated Artist at the Royal Northern College of Music and He is sponsored by the Arts Council England as an Exceptional Talent to work and live in the UK.